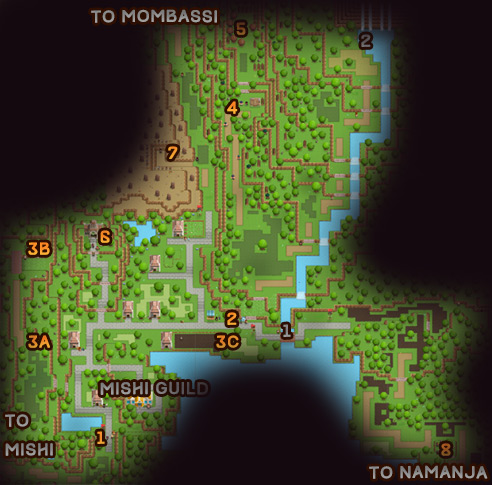 Head along the canyon until you reach the Mishi guard standing beside Zina (and infront of a cool looking Rhiyew!) Tell him you need help and if he doesn’t believe you tell him to look at the giant plume of smoke behind you! He will tell you to go speak to the Mishi Elders.

Zina will suggest you split up. She will look in the Mishi guild, don’t follow her. Go north and then east. The elders are located near the base of the waterfall path.

The Mishi Elders will request you get some pineapple flowers. Head in a general south west direction and up a set of steps, then head north. This is where an NPC that looks like an outdoor camping enthusiast is located. Speak to him and engage in battle! If you have caught 3 Terra Monsters this battle should be easy.. If not you may find it difficult. [3b] Upon defeat Brennan will tell you the pine apple flowers are to the north. Cross the bridge and head down the steps. There is a troll underneath the bridge! Defeat him, then pick up the pineapple flowers and return to Brennan. [3c] Brennan will then instruct you to go back to the elders with his pineapple flower potion.

Head north up the steps (just to the right of the elders) Cross the swampy grass to find a path, carry on up the path. On this path you will have to fight a number of battles. At the end of these battles you’ll reach a lumberyard.

Head north from the lumberyard and up a couple of steps. You’ll reach a little clearing where the trees turn orange. These are the trees you’ll want to cut. Stand infront of each one and hit the yellow action bar bottom left. Watch out those some of those trees might be a Sappress so be prepared to battle! Once you have chopped at all 6 trees head back down south to the Elders

Head west along the path then north up a series of steps. Just in front of the Mishi HQ you’ll see a gathering of people and a Dozer, these are the Mishi Rangers talk to them.

Go back down the steps head east then north along the path. You’ll exit Mishi (going beyond the watch towers) for a brief moment so be on the look out for any Namanja Raiders lurking around! Take the first left off of the track into a little clearing. Gage is located there.

You’re all set now to take the fight to the Namanjans! Head back south to the center of town, then east. Go past the watch towers, you have no left Mishi. Follow the track as it winds south. Eventually you will find the Mishi Rangers again, they’ve step up camp. Walk up the steps and find out what they have planned for you!

SIDE QUEST(IN GREY): The Waterfall Thief

Towards the east of Mishi you’ll find Kofi (the bait vendor) again! He’s standing just before the bridge. He will inform you he’s been robbed. If you do choose to help him head all the way north up the steps close by to the west. Hug the river all the way up until you come to the big waterfall [2]. This is where the Waterfall thief is hiding out. Once you have defeated return to Kofi.

Retrieved from "https://terramonstersworldgalaxy.fandom.com/wiki/Mishi?oldid=20118"
Community content is available under CC-BY-SA unless otherwise noted.