Start a Wiki
Terra Monsters Online was a massive Multiplayer Online Game in which you had the ability to battle, chat, rank up, and even customize what color your terramonster is! This is later rumored that it was a "Beta Test" for the actual Terra Monster IOS Games. Terra Monsters Online was created in March 8, 2012, and was available on Kongregate on April 19, 2012, before moving onto many other websites to create a vass variety of different people from different websites like Facebook.

The server is later shut down due a rumored, money shortage and less people playing it because it was too buggy and glitchy. No one could get pass the login screen.

The Hack of 2012 was a massive hack that left Terra Monsters into pieces barely two months after it's release, causing everyone to their data. The Social Titans Foundation announced that Terra Monsters will not be working until they recover everyone's data. This caused mayham and restless users in wonder if they will ever get their work worth of data back. In the end Social Titans created the "recovery button" in which allowed users to recover their accounts, IF, they knew what level their monsters were and what monsters were in their team.

Many users began having their data stolen from others who wanted to be like them. Any user with a Narwhalite or very high level monsters were targets. Though rumors said that Social Titans took down the data thiefs due to complaints. Later the "Recovery Button" turned into a code that was needed to be written in the chat in order to active it. This is to protect newer players from trying to "Steal" people's identities.

The Equinair hack was a odd hack that involved the Equinairs in Skyward. A Hacker created them to be invincible, causing mayham as users were catching them, after many long tries, and using them against other players unfairly. This also caused problems for people traveling through Flockhart Forest. These equinairs stats were way above normal, and their HP can range over 10,000. These creatures made XP farming quite easy. Even after the hack was patched, those with an Equinair still had their after effects which was only with their HP. Once it was used up, it could never be as high as it use to be.

The Cross Country Railway was a train track where you could travel from Ocean Road to Shrieking Hallow. 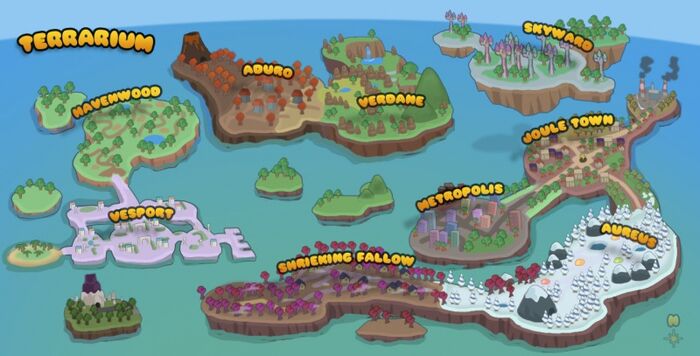 In Terra Monsters Online, you could customize your character with free materials or with Terra Dollars and/or Honor Points.

Retrieved from "https://terramonstersworldgalaxy.fandom.com/wiki/Terra_Monsters_Online?oldid=19685"
Community content is available under CC-BY-SA unless otherwise noted.