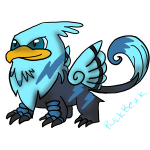 Hi there Terra Ranchers and monsters. I am BuckBeak the incredible Riffindor who is awesome! A few things about me are:

Well that's all for now. You can always check out my favorite page(s)! Good Bye for now!

So far Riffin is in the lead with 1 vote from User:PantThePlantDragon.

Here is where you can see some of the monsters from Pizzachu's Ranch. There will be random monster of the day, main lineup and newest recruit.

Random Monster of the Week

Retrieved from "https://terramonstersworldgalaxy.fandom.com/wiki/User:BuckBeak_The_Pizza?oldid=20538"
Community content is available under CC-BY-SA unless otherwise noted.